Will a Metal Roof Attract Light and Absorb Heat? 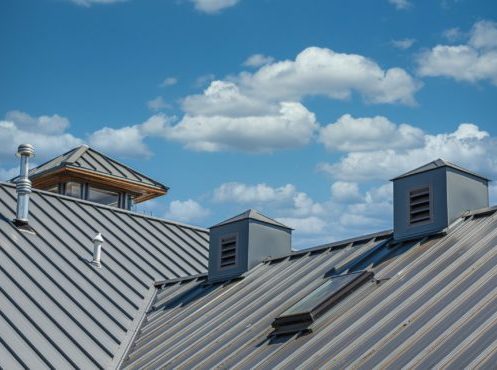 One of the best ways to add both aesthetic and intrinsic value to your North Charleston home is by having an all-metal roof installed. Fast becoming one of the most popular options in roofing, all-copper roofs have natural antimicrobial properties that keep things like roof mold and mildew at bay. They’re also enduring. Any all-copper or other all-metal roof that you install today could still be functional 70 years from now. Notwithstanding these things, many homeowners are concerned that all-metal roofs are subject to excessive light and heat absorption. Read on to find out why this couldn’t be further from the truth.

The Thermal Mass of Metal Roofs Is Low

Thermal mass and thermal lag are two important properties to understand when choosing roofing materials. Thermal mass indicates the rate at which a material absorbs heat and thermal lag reflects how long this same material will take to release heat after it’s been absorbed.

Although relatively low in cost and among the most popular roofing choices in the nation, asphalt shingles have a very high thermal mass. This is due to the weight and density of asphalt. It is also why on days with record-breaking temperatures, people often describe the climate as being “hot enough to fry an egg on the sidewalk.” Not only does asphalt have a high thermal mass, but it’s also got significant thermal lag. The heat that asphalt shingles absorb will be retained for quite some time. To offset these things, insulation and reflective membranes can be used so that both heat absorption and heat retention are lessened.

Comparatively, all metal roof types have a low thermal mass. At certain slopes, metal roofs also have virtually no thermal lag. Rather than absorbing thermal energy, metal roofs reflect it. Best of all, they do so without causing bright glares. With an all-metal roof, your efforts to control your home cooling costs won’t be largely reliant upon insulation. While insulation will still remain an important part of your roofing system, the roof itself will be the single greatest contributor to your home’s overall efficiency.

However, there are certain factors that play a major role in determining just how efficient a metal roof is. These include:

Certain metals and colors both absorb and retain more heat than others. As with all things relating to roofing, small changes in slope, materials, layout, color, and design can have marked effects on how the entire roofing system performs.

Roof Mass and Its Impact on Thermal Lag

Dense, heavy materials have the highest likelihood of retaining heat. In fact, the larger, heavier, and denser a material is, the longer it will retain thermal heat. Consider then that metal roofs are incredibly lightweight. Metal roofing panels are slim and they’re also among the least dense roofing materials available. Thus, if your metal roof absorbs any heat during the hottest portion of the day, all of this heat will be lost as soon as the sun sets.

Not All Metals Are Ideal for Roofing

Copper is an outstanding metal for designing a roofing system that doesn’t absorb or retain an excess amount of heat. However, other metals don’t stand up as well in this same respect. Copper is a highly conductive metal. Although having a high level of heat conductivity sounds like a bad thing when the primary concern is having roof heat transfer into the home, the important thing to remember is that thermal mass and thermal lag go hand-in-hand. Any thermal heat that copper absorbs will be released into the natural environment before it affects your home. Moreover, when copper roofing is installed with a reflective finish, it won’t absorb much heat at all. This is also true for aluminum, galvanized steel, and Galvalume-treated steel.

Compare this to asphalt shingles that both collect heat and retain it. It takes far longer for asphalt shingles to cool down after the sun has set. The considerable thermal lag of asphalt is the largest contributor to the urban heat island effect (UHI). With UHI, urban areas that are densely populated with concrete buildings or buildings with asphalt roofs tend to be several degrees hotter than the rural regions surrounding them.

Just as material selection is important when having a metal roof installed, color selection is critical as well. Black and other dark-colored roofs are more likely to retain heat than lighter options. Whether you have a natural stone roof, asphalt shingles, or copper roof panels, darker colors will always absorb and retain larger amounts of heat. Thus, when choosing your metal roof, you may have to make a compromise or two when it comes to desired aesthetics in order to ensure optimum levels of efficiency. However, this will remain true no matter which roofing material you ultimately have installed.

The Benefits of Reflective Coatings

Another major concern that homeowners have when installing metal roofs is the potential for bright glares. After all, if most thermal energy or heat is being directed away from a metal roof by reflection, how will this impact the retinas of everyone living in the area?

Metal roofs are always treated with low-glare reflective coatings that serve their purpose without causing eye damage. Your shiny metal roof won’t sunblind your neighbors while they’re attempting to park their cars, and it won’t stand out like a sore thumb. Advanced roof coatings enhance the efficiency of metal roofs and make these materials suitable for use in residential areas.

It’s also important to note that the term “all-metal roof” is actually a misnomer. It lends to the idea that an all-metal roof is just a decorative, water-tight layer of metal that’s applied directly on top of a home’s rough framing. Just like all other residential roofs, metal roofs are complex systems that are made from many different materials.

With a metal roof, you’ll have attractive metal panels in place of asphalt shingles. The roof cladding in your roofing system will be metal as well. However, this will all be supported by a wood substrate that’s covered by a thick layer of insulation, and multiple moisture-resistant and moisture-blocking materials.

The Benefits of Metal Roofing

There are seemingly endless options in metal roofs to choose from. These include:

Homeowners can also choose between standing seam metal roofs and screw-down panels. Each option has its own benefits and drawbacks, and most can be streamlined to suit the design visions and efficiency goals of the individual household.

Metal roofing is attractive and long-lasting. Most systems are rated to last four decades or more, and some can even last up to seven decades or longer. When properly designed, light-colored metal roofs with low-glare, reflective coatings can also be the most efficient choice for your home.

At Charleston Roofs + Windows, we’ve been helping residents of North Charleston, South Carolina and the surrounding area make informed decisions about their homes for quite some time. We also offer reliable storm damage repair, roofing installation, and window repair services. If you have questions about metal roofs, we’ve got answers. Call us today to schedule an appointment or to request an estimate.

Does Your Roof Need Work? We Can Help.

If you need a new roof or roof repairs but aren’t sure about how to handle the bill, we also offer specials and promotions. We work with you at every step so you can rest easy under a leak-free roof. Give us a call today to schedule an inspection and estimate for your roofing needs here in Charleston!